Yes, they can be dangerous! Bulls or in as on our ranch Black Angus bulls. These are some of our bulls. This bunch ranges in age from one year to three years old. They weigh between 1300-2100 pounds. Currently they are about a month and a half away from being turned out with the cows. They will spend about 45 days or so getting the cows bred. Then they go back to just hanging out in the bull pasture.
Most of the time they are pretty docile and even friendly. Most of them will eat out of my hand. Three of them love to have their heads scratched. One of the top three traits we chose our bulls for is temperament. We have bloodlines we have found to be great for that in the bulls and they pass it on to their offspring. If one of our bulls is aggressive, he "goes down the road" to the sale barn. We don't need one that we need to be afraid of.
However, as friendly as they can be, they also can be moody and testy. Especially when they think it is time to get turned out with the cows. Even the ones who are friendly are less so when they are wanting to get to the cows and when they are out there with them.
One thing to keep in mind is, the bulls have their pecking order. As people, we are at the bottom of the social ladder, no matter how much a bull likes us or seems tame and friendly. They spar back and forth reminding each other just who is ranked where. All it takes is a second for a bull to think he needs to remind you of just how low are are and he can hurt or kill you. He might not mean to really hurt you if he pushed you but he doesn't realize how much he can hurt you.
When they are sparring back and forth, the best place to be is no where near them. They are oblivious to everything and everyone but the one they are fighting with. Imagine getting between to bulls each weighing a ton! 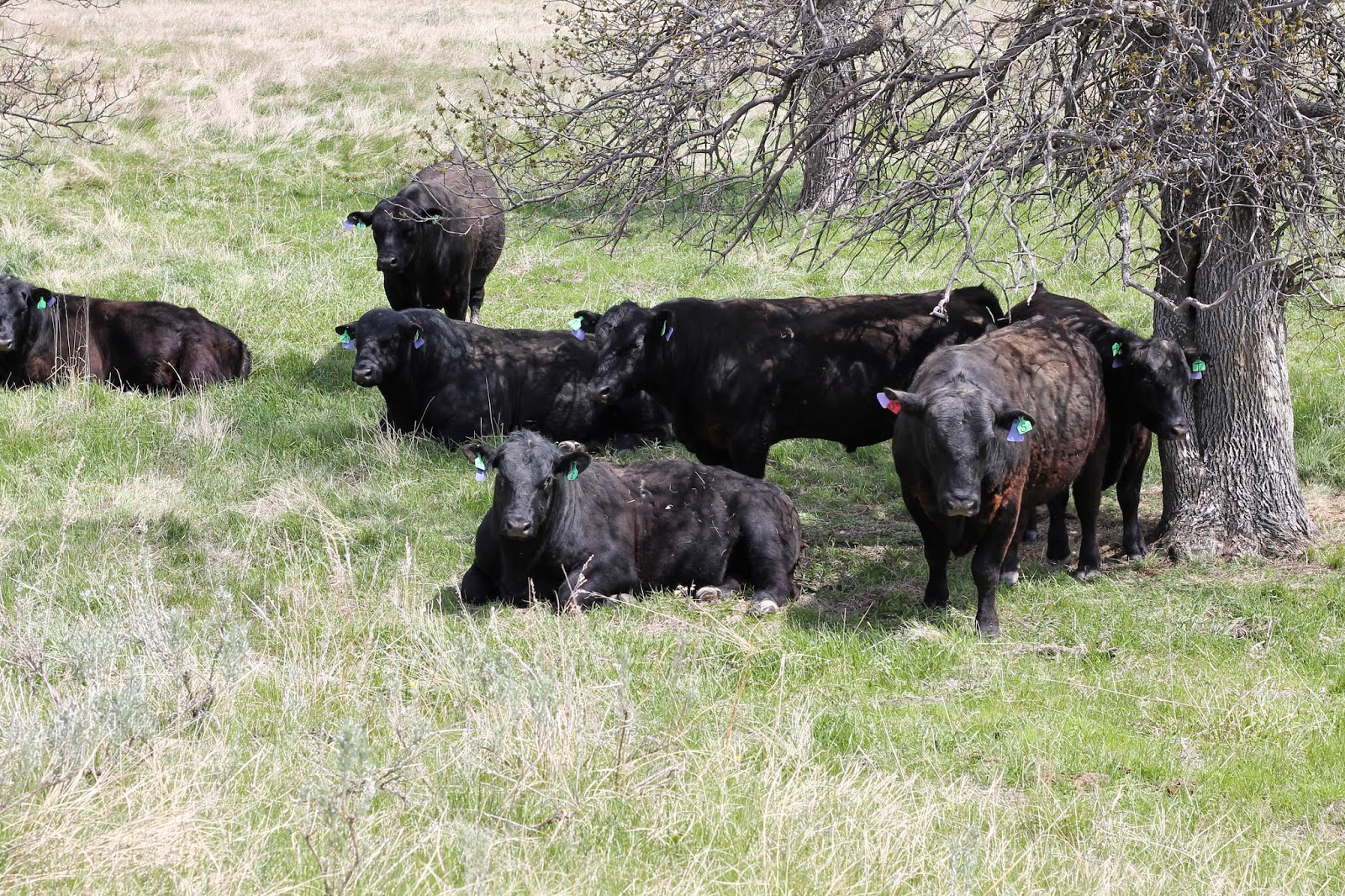 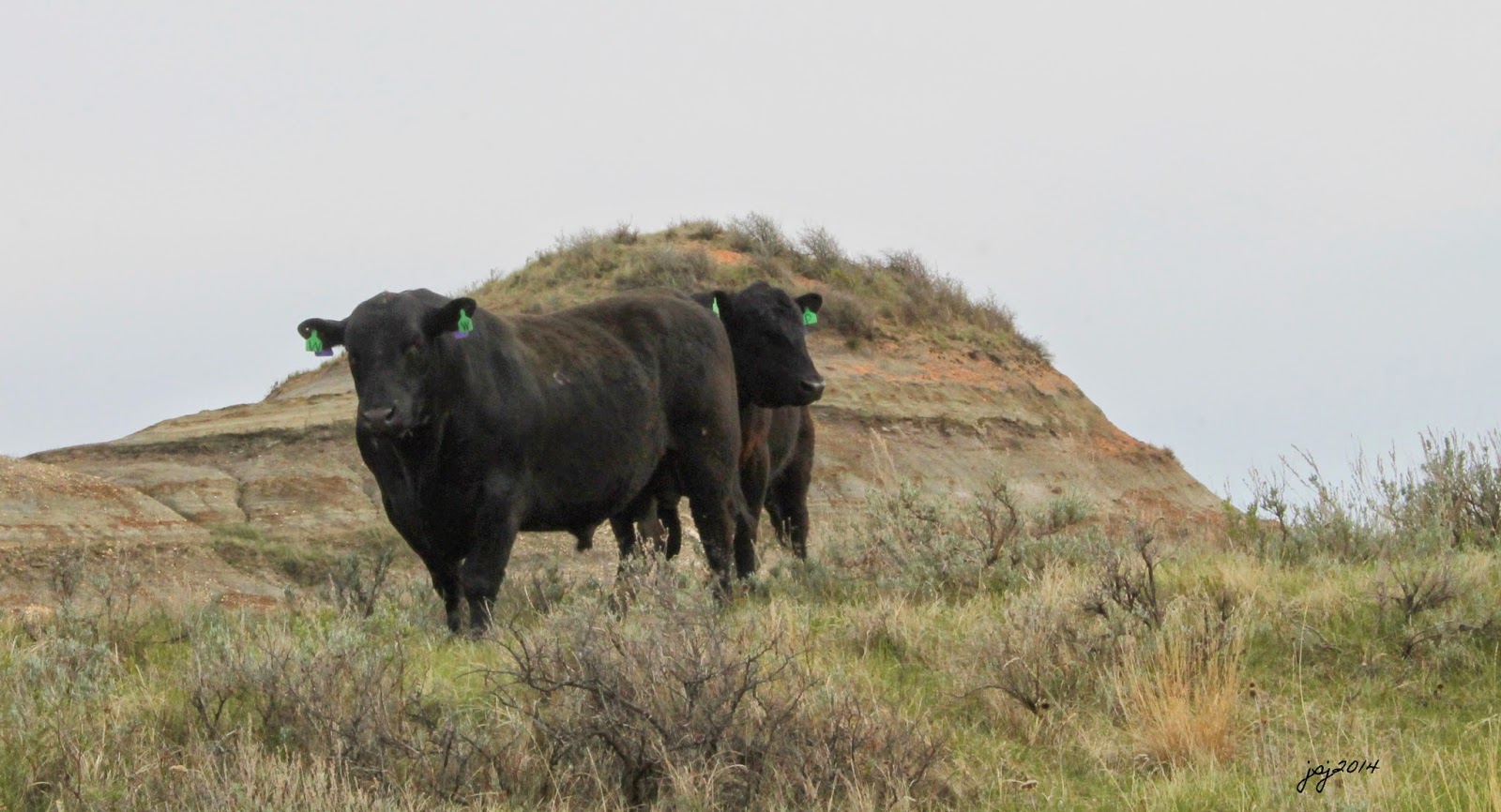 I live on the edge of the big Bakken oil boom area. The oil boom has brought many things -both good and bad to western North Dakota and eastern Montana. The good things of course are jobs, money, new businesses,and  a huge supply of oil for our nation.
The bad things are crime of all sorts, traffic, price gouging on many things and more people than many of us prefer to have in our little corner of the world. At the top of the list though, is the environmental impact the oil boom has had here. Oil spills,saltwater spills and flaring of natural gas off of the oil wells are major problems. Probably the most noticeable of all is the amount of trash that we now have.
Trash of all sorts litters the ditches, fence lines, roadsides year around. Some of it is trash that has escaped trash dumpsters at well sites.  Trucks going down the road lose buckets, boxes, plastic wrap. New buildings being constructed are prime places for pieces of plastic and cardboard to take off from too. The wind is a constant presence here, so much of the trash finds its way into fences and trees.
I think a major amount of trash comes from people just going down the road and tossing stuff out the window. Beer and water bottles, fast food bags, someone's bag kitchen garbage they are too lazy to put in a dumpster, old clothes. Some pretty disgusting and surprising things can be found along the roadways.

Today, I went north about 120 miles to Williston, ND to watch my granddaughter in a volley ball tournament. Williston is in the heart of the Bakken oil boom. I was excited to think about all of the "good trash" photos I would get when I was in that area. However, my husband stayed home today, and I am not as daring at stopping along side the busy road up there. So I didn't get the photos I had hoped for! Believe me, though. The trash in the ditches was horrible. Plastic bags, coffee cups, 5 gallon buckets, huge barrels filled the roadside more often than not as you approached the oil patch and the surrounding towns.
The photos I did get taken were on two stretches of  US 85 that had surprisingly no traffic for a couple of minutes. I was able to take these trashy shots of a place right alongside the highway that really can't be called a junk yard but is full of junk and trash. 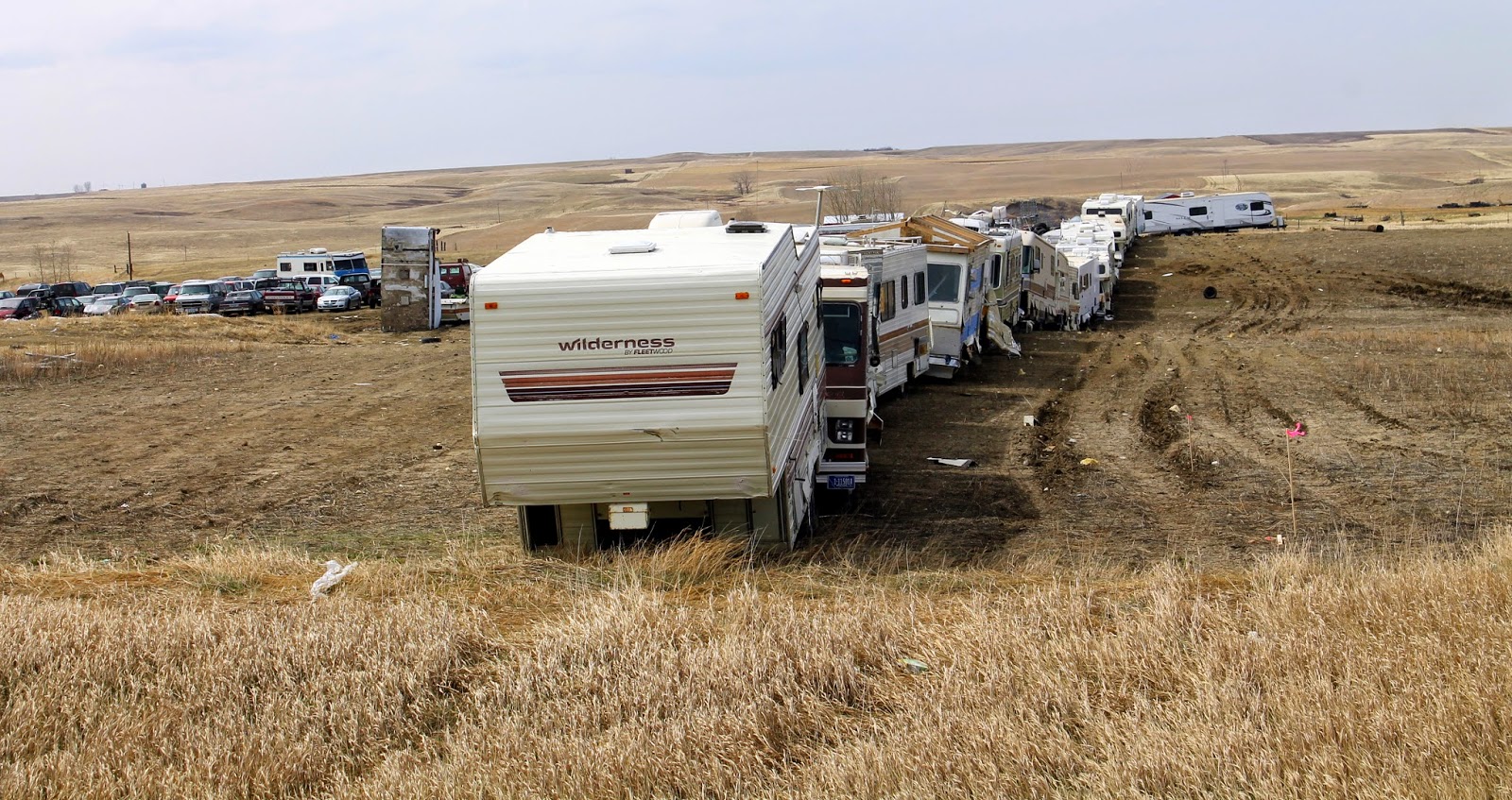 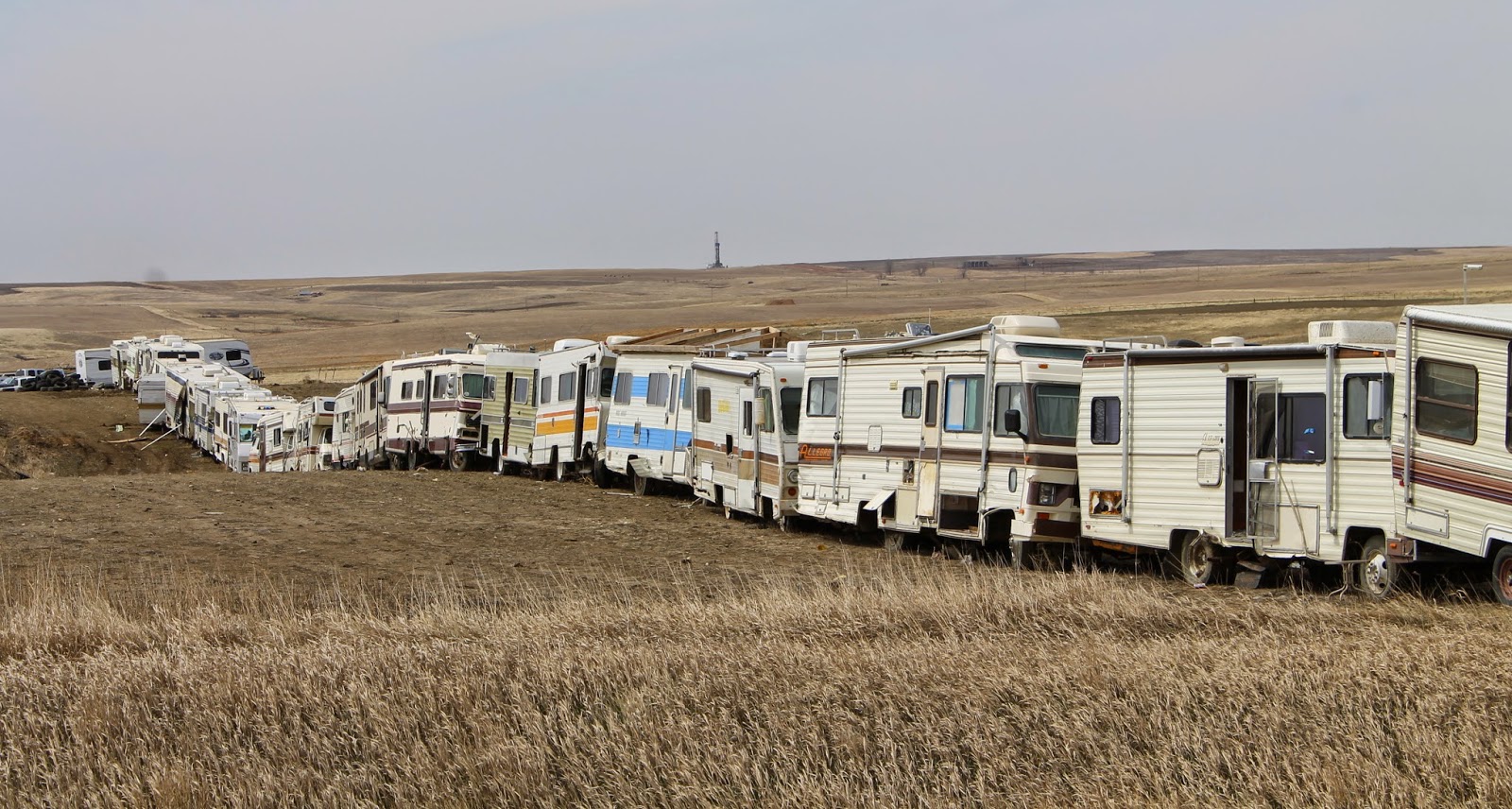 Seven or eight years ago, rv's in the area were used to go camping, hunting, or take to the lake fishing. When the oil boom started, housing was at a premium and many people who arrived to work in the oil patch couldn't find housing. Camper trailers and recreational vehicles became hot items to buy or rent when houses or apartments were unavailable. Many people have spent some very cold North Dakota winters in a camper trailer or rv. I can't imagine living in one with our minus 30F temps we have in the winter and then add to that a hefty wind blowing. This place seems to have become a final resting place for some of these former homes. 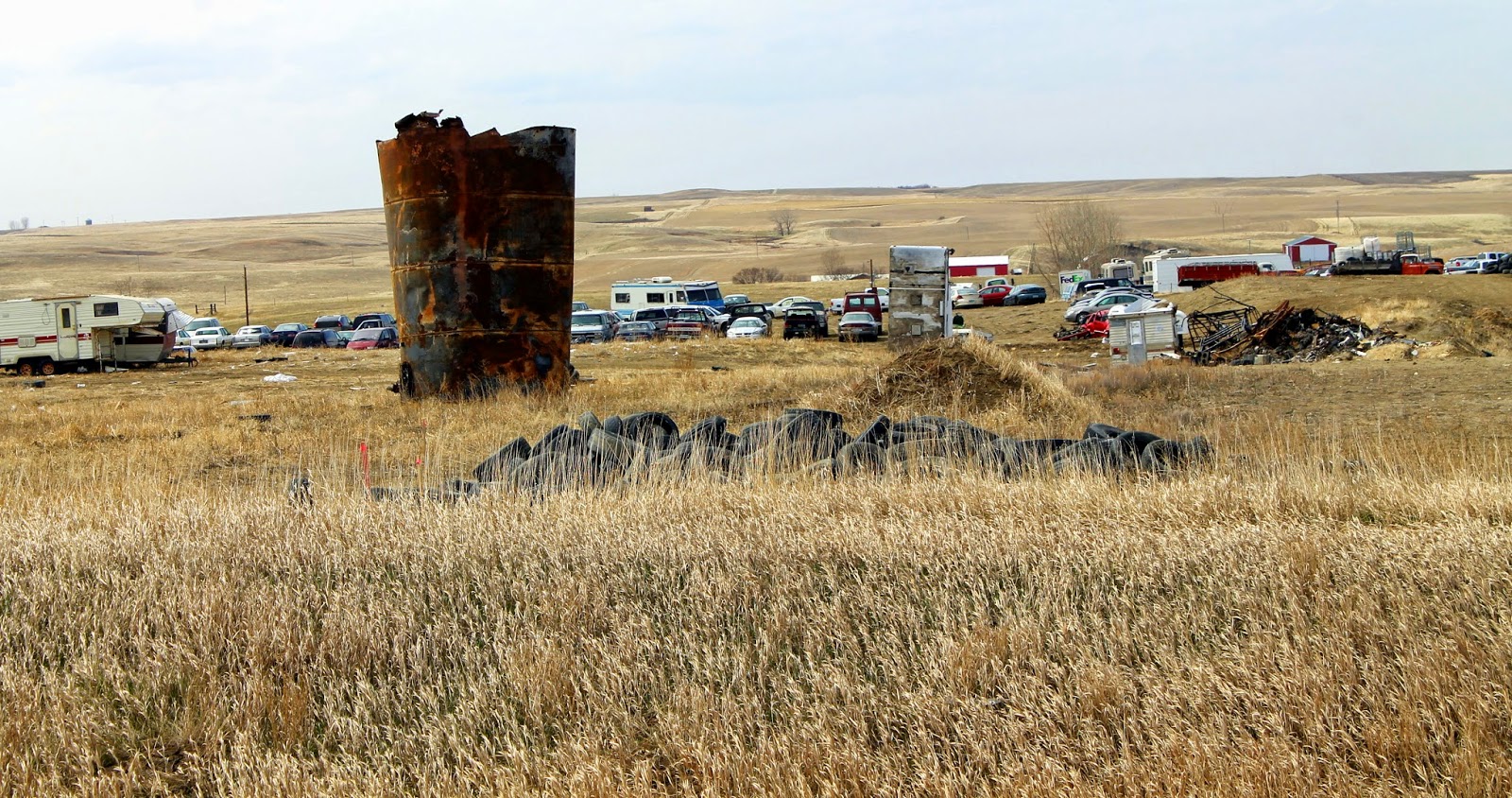 I hate seeing the amount of trash piling up around us from the oil boom. When it is over, I am sure it will still be here while those who made the mess will for the most part be gone from the scene. 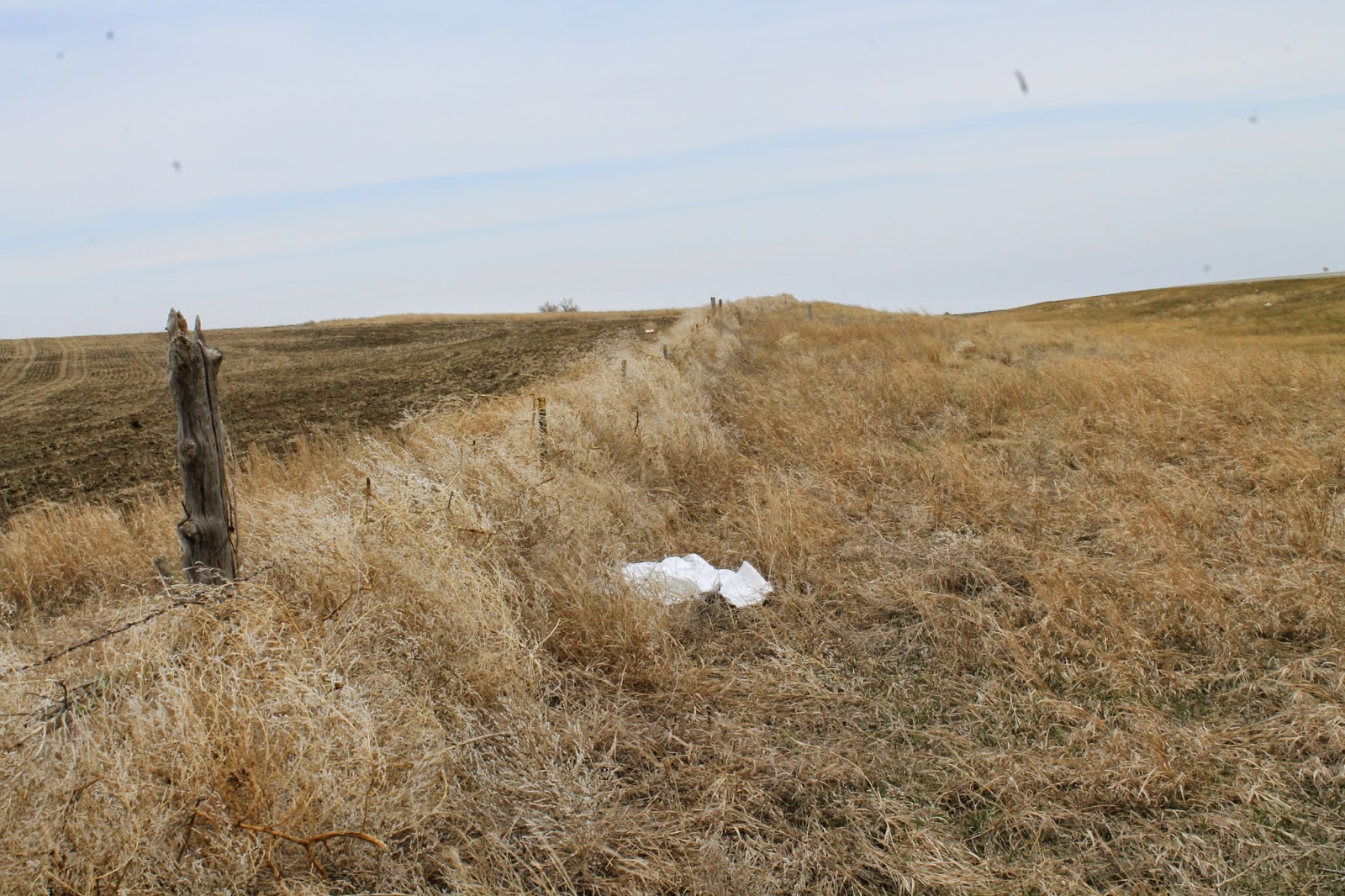 The tumble weeds will still be blown by the wind, and unfortunately,  so will the trash.